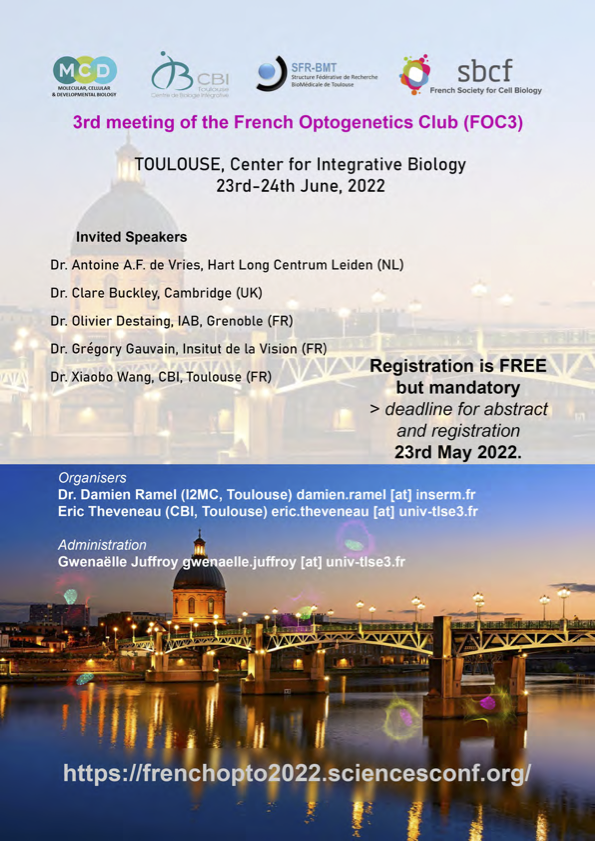 Optogenetics is a cell imaging technique that has been gaining momentum over the last decade. Indeed, this technique allows to manipulate the intra-cellular signaling or the fate of proteins in real time on living cells using light. Optogenetics has thus become a tool of choice for cell biologists. Moreover, it can also be used to study physiological processes via the control of cell populations in vivo as it is the case in neuroscience or cardiology. Thus, new optogenetic tools are continuously developed and new methods appear, allowing to control the functions of the living in real time and allowing major scientific advances in many fundamental or more applied disciplines.
At the local level, several laboratories of the SFR-BMT and more widely at the Toulouse level, use these techniques and several TRI platforms are involved in optogenetic projects with the existence of several equipments able to implement these methods.
This symposium will be the third meeting of the “French Optogenetic Club”. The previous edition took place on June 26 and 27, 2019 at the Curie Institute in Paris. This day was a success especially through the presentations of European experts such as Olivier Pertz (Bern, Switzerland) or Stefano De Renziz (EMBL, Heidelberg). The third edition of the “French Optogenetic Club” will take place in June 2022 in Toulouse in the new amphitheater of the CBI Building of the Paul Sabatier University. For this edition, several internationally renowned researchers have accepted our invitation:
– Antoine A.F de Vries (Optogenetic heart rate control, Leiden, The Netherlands),
– Clare Buckley (Optogenetics in Developmental Biology, Cambridge, England).
– Grégory Gauvain (Optogenetics as a therapeutic tool, Institut de la Vision, France)
The program will be completed by French speakers including experts from Toulouse and/or PhD students.
The event is supported by the French Society of Cell Biology (SBCF), the federative research structure of Toulouse (SFR-BMT), the Center for Integrative Biology (CBI) and the companies Zeiss and Diagomics.